The other day we were hungering for a quick Indian meal before heading to watch Woody Allen's much acclaimed movie Midnight in Paris at Ritz 5.

Our choice fell on Karma (2nd St and Chestnut St) as it is the closest Indian restaurant to Ritz 5 (2nd St and Walnut St).

There were no standout dishes at Karma.

But much of the food we tasted at Karma with the exception of Sambar and Channa Masala was OK.

What irked us, however, was the unhygienic dining room and table practices and overall poor service. More on the poor hygiene later.

Alu Papdi Chaat was OK, Pav Bhaji minus Pav was tasty and Idli was soft and fluffy.

We would have enjoyed all three appetizers more but for the ugly color of green chutney, awful Sambar and Pav Bhaji without the Pav. 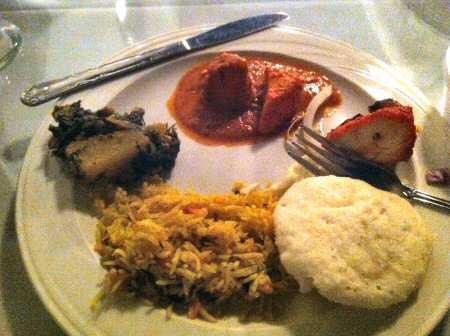 Paneer Vegetable Delight was creamy, tasty and gave no room for complaint.

Alu Saag had a slight burnt flavour but was quite spicy and we enjoyed it with Naan bread.

Vegetable Biryani was flavorful and plain Rice had a fresh texture.

Chicken and Fish Items at Karma

Tandoori Chicken with decent marination was good. Fish Masala in too watery a gravy did not endear itself to us.

Gulab Jamun was a overcooked mess with mushy texture robbing us of the pleasure of enjoying this staple Indian sweet. 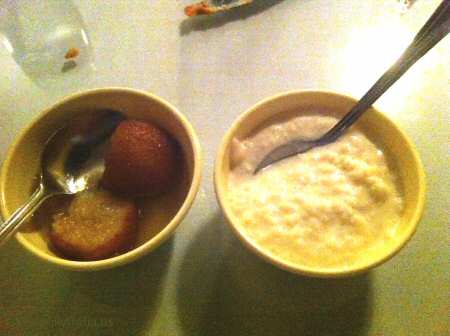 Gulab Jamun (left), Rice Kheer (right)
But the Rice Kheer was a creamy delight and more than made up for the crappy Gulab Jamun.

While we did not have too many gripes about the food, what irked us at Karma were its Unhygenic practices.

The second irritating thing was that the wait staff never made any attempt to prevent diners from carrying their used eating plates during their revisits to the lunch buffet table. Allowing diners to re-use their used plates is an extremely unhygienic practice and a big disservice to paying customers.

While the wait staff filled our water glasses promptly they never cared to ask us if we need extra bread or anything else to go with our lunch. All that they seemed eager to do was to grab the plate from our table before we could even finish.

PhillyIndia.us recommends Karma on Chestnut Street only if you can stomach its unhygienic practices and poor service. - © PhillyIndia.us