It’s been a distressing summer this year in the U.S.

The heat is unrelenting and no matter how much beer we quaff we feel lousy.

So in a irritated mood we headed to Killadelphia, known in more peaceful times as Philadelphia, the City of Brotherly Love, for a change.

Tired of the unending run of mostly crappy Indian restaurants, we headed to Manakeesh Cafe & Bakery, a Lebanese restaurant on Walnut St (at 45th St) in Philadelphia.

Manakeesh has received favorable reviews and has a good selection of both vegetarian and non-vegetarian items on the menu. Parking is a bit of a headache in the area and we had to park two blocks away.

The inside of Manakeesh is slightly dark. You head to the counter, place your order and get a plastic number token that you place on your table. When the food’s ready, the waiter brings it to your table.

Being famished as usual, we ordered a whole bunch of stuff – three sweets (one Baklavah, a date Ma^moul and a Pitachio Ma^moul), Kafta (ground lamb and beef with Parsley), Falafel, Vegetarian Combo (half Zatar and half cheese) and a Spinach pie.

There’s seating outside too on the side and we opted to dine alfresco gazing at people walking by on the Walnut St sidewalk.

The pastries came quickly since they are prepared and housed in a glass case near the cash counter.

The Baklavah ($1.50) was a gorgeous, honey and some nut filled layered delight that had us swooning. We’ve had grocery store Baklavah on several occasions but the Manakeesh version is nonpareil. 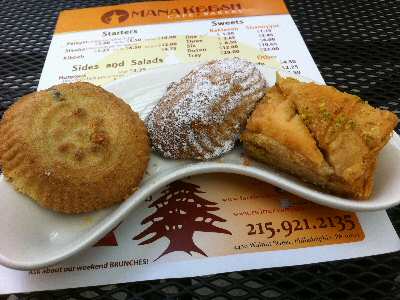 Date Mamoul (L), Pistachio Mamoul (C) & Baklavah (R)
But $1.50 for a small Baklavah piece, delightful as it was, seemed like daylight robbery for this cheapo desi.

Pistachio and Date Mamouls ($1.75 each) were crumbly and not as sweet as the Baklavah. But a delight nevertheless.

As we were polishing off our Bakklavah and Mamouls, the Kafta and Vegetarian Combo showed up. 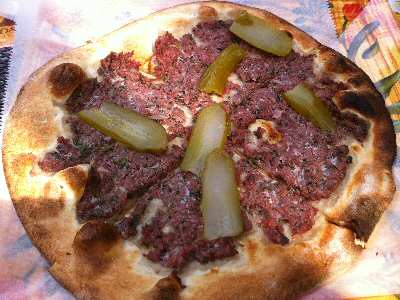 Kafta (Ground Lamb & Beef with Parsley) – Deeelicious
Setting aside the small crumbs of the Mamoul left over, we immediately fell over the Kafta flatbread that came with a few pieces of pickled cucumber on top.

Yummm, delicious. Drooling on our keyboard at the sheer thought of it.

Each time, we lifted the Kafta bread to our mouth the pleasing, heavenly aroma of the meat hit our nostrils heightening the anticipation of the bite. Kinda like going down on…well, you know the rest.

Fatayer (Labanese Spinach Pie) was most definitely not worth it.

The Samosa-like pie ($1 a piece) was small and had a small filling of Spinach inside. 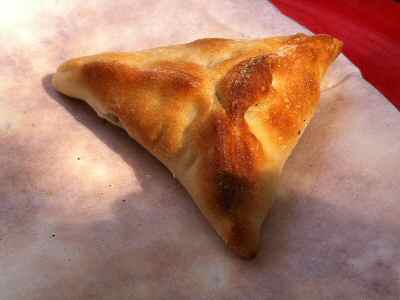 Forgetting the disappointing Spinach Pie, we eagerly turned to the Vegetarian Combo that came hot to the table. 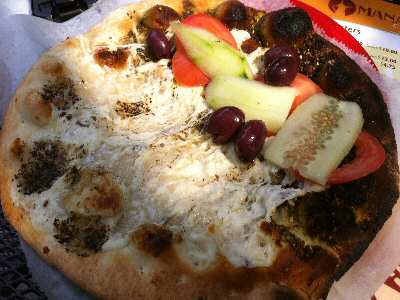 Vegetarian Combo at Manakeesh
Alas, it was not what we ordered. There were no vegetables on top and the whole bread was covered with cheese, instead of half Thyme and half Zatar.

Also, the bread was badly burned on the edges of one side.

Despite the acts of sabotage, our Vegetable combo still tasted good after we went in and got our order ‘fixed.’

Unlike Indian bread (Naan etc) that becomes unpalatable after a few minutes on the table, the bread at Manakeesh remained tasty till the last bite several minutes later.

At $4.50, the Falafel was a good deal, particularly if you’re heading there for a quick, non-heavy lunch. 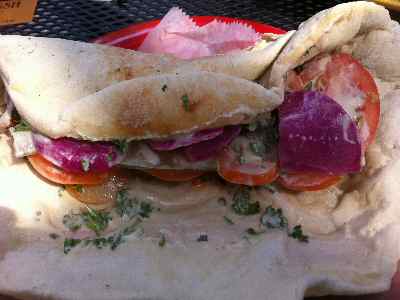 Falafel Wrap ($4.50)
We ended up with the wrap version. The guys at the counter never offered us a choice (wrap or plate) but we should have also been more alert to the options on the menu.

The Falafel wrap had four Falafel balls, four tomato slices, a single slice of pickled cucumber and four slices of a pickled vegetable that we couldn’t identify.

Overall, it tasted good but we like the Falafel at Maoz on Walnut St (bet 12th & 13th St) better. 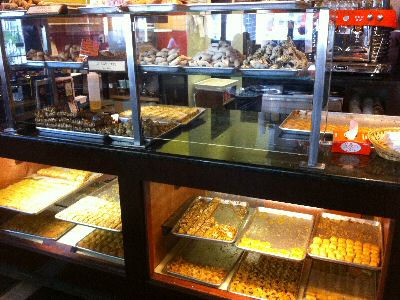 Like with a lot of ethnic restaurants, good service is not a word you’ll find in Manakeesh’s dictionary.

They messed up one of our orders and although the counter-guy apologized in a perfunctory sort of way we weren’t pleased since there was no excuse for the error (there was hardly a crowd during our visit).

Even when he ‘fixed’ our messed up order, the clowns did a poor job, not caring to daub the Thyme layer on top.

Also, does it cost anything to smile at customers and say, Hi, how are you?

Don’t expect that at Manakeesh.

The waiters move about with grim visages as if they’d just returned from a dear one’s funeral.

And what’s wrong with giving customers a receipt.

By the way, the rest room at Manakeesh was very clean (restrooms in Indian restaurants are usually a messy affair).

Its service snafus and the few problems with our food aside, we might still drop in at Manakeesh again. - © PhillyIndia.us